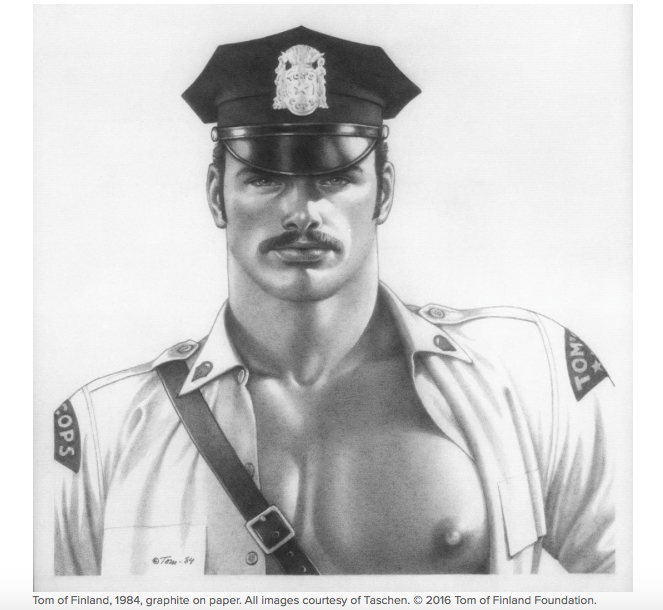 But let’s not focus on the negative. No, let’s get (sex) positive and focus on the drool-worthy draftsmanship of good old Tom, and his men, oh his men!, with their musclebound master-class brawny six-packed bodies slicking over with a lusty sheen of sweat at the mere thought of overpowering and violating the vulnerable others placed at their mercy, just glowing in their uniforms, which can barely contain the uncontainable  “masculine physique in all its grandeur.” Did someone say “cocks the size of forearms”?

On second thought, really, don’t, because while the Paris Review assistant editors of the world are off drooling away over fashionably retro black&white visions of Absolutely Consensual weaponized male “exploitation play” eroticism and the carnal battering ram that is fetishized masculinity, here-and-now reality’s black&white vision is unfolding a bit differently, with the “exploitation play” favored by police officers IRL a great deal less playful and the battering ram of their masculinity a lot more, well, battering. Lethally so. And how many victims of police officer’s male violence do you suppose consented to being brutalized?

To fetishize in the figure of the Cop Sex God a malignant masculinity typified by physical force and a sexuality grounded in phallocentric violent domination reinforces male supremacy in social reality, just as no matter how consensual, sexual fantasies of violence strengthen the association between violence and sexuality that guarantees real acts of sexual violence and victimization. “Queer” malignant masculinity and “queer” male violence is still malignant, still violent, and it’s a callous absurdity to fawn over these things as (sexy) fun and (sexy) games, when reality adheres so faithfully to the so-called fantasy, and instead of having a world where “everyone, very happily, gets laid,” we’ve got ourselves a world where the consequence of male supremacy’s violent enforcement is that everyone but the male select, the ones with the guns and the money and the sex- and race-class privilege, and who knows, maybe even those mythic arm-sized penises, ends up brutally fucked.

Queering the violence of the status quo does not erase its cruelties. Calling stylized imagery of such violence “fantasy” does not extricate that violence from reality. The arousal that is our reaction to images of such violence is not a spontaneous, organic bodily response, but a conditioned one, the product of our sexual psyches having come to bloom within a white male supremacist culture wherein sex is violence and violence is sex and men are Men and Men fuck and the Fuck razes the victim, who loves it: annihilation.

Please, Paris Review, spare us all: No More Fucking//Killer Cops.