This June my mother and I went to Sweden and while we were there we visited several art museums, as is standard whenever we go anywhere together. Ostensibly, we both enjoy seeing art. Moreover, my mother loves gift shops. Among the art museums on our itinerary was the Gothenburg Museum of Art, a gorgeous museum, maze-like and old, with baroque gilt frames, high ceilings, rooms of melancholy Swedish landscapes – grey snow, “the long grey dusk” – and then there was this: 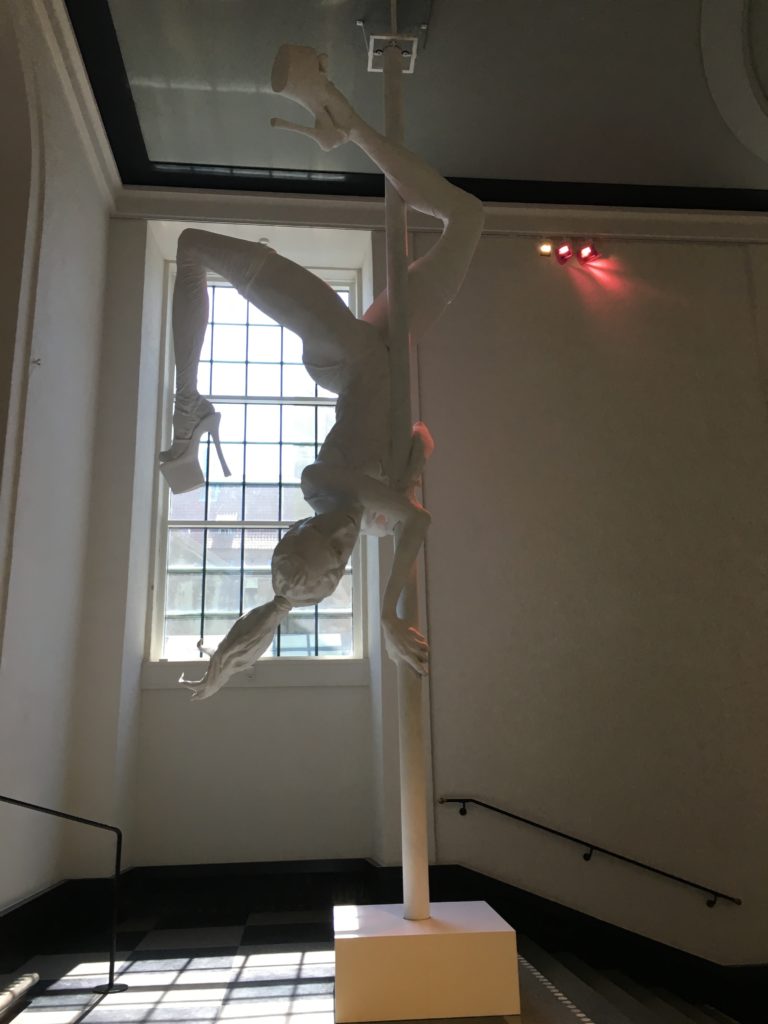 A 20′-tall floor-to-ceiling stripper pole ornamented with one inverted nymphic giantess in panties and camisole, thigh-high stockings, and platform heels, slowly, permanently rotating. Medium: styrofoam, plaster, fiberglass, the object status of female humans. Pink light. I thought I was looking at yet another example of the sexualized female body exhibited for display to an androcentric masculinist target audience for whom the only laudable thing for a woman to make or to be is a sexualized object, on display, for the male viewer. Yet again, the point was that I was looking at a woman. She was skinny, white, fashionably lacking in clothing, so I’m recognizing her as “ATTRACTIVE.” Here I am, looking at an attractive woman, and she is art; the pleasure is in looking at her. I am supposed to derive some satisfaction from looking at a giant white stripper eternally circling her pole. Certainly the men in the sculpture gallery with me were satisfied with the object they were viewing. They saw a woman the way they wanted and expected to see a woman: as a sexualized object. And they were smiling and chuckling to themselves. I hated them. And I hated the piece, entitled “Seconds in Ecstasy,” the product of the Swedish sculptor Casja von Zeipel.  All she makes are these skinny white foam women and more rarely men, sometimes a stiletto boot off on its own. My mother and I saw another sculpture of hers outside a department store: white woman, high heels, leather jacket, underwear, holding up the store like Atlas holding up the globe, sort of the embodiment of the seas of young women destined to enter the store to buy high heels and underwear seeking to become beautiful to the eye of whoever until the death of white supremacist capitalist patriarchy.

Ok, so there we were, me and my pals the chuckling men, thinking we were looking at one more objectified female body, on a larger scale than usual perhaps, but otherwise the usual, basically similar to all of the other objectified female bodies we were bound to encounter as we moved through our lives that day. In fact, even as I stood there looking at the stripper I was living in such a body and feeling uncomfortable and hating the giant stripper for making my objecthood all the more present to the men with whom I shared the room. However I was wrong, we were wrong; we were not looking at an objectified woman even though we were looking at a stripper, for with art it’s always far far more complex than that, isn’t it? 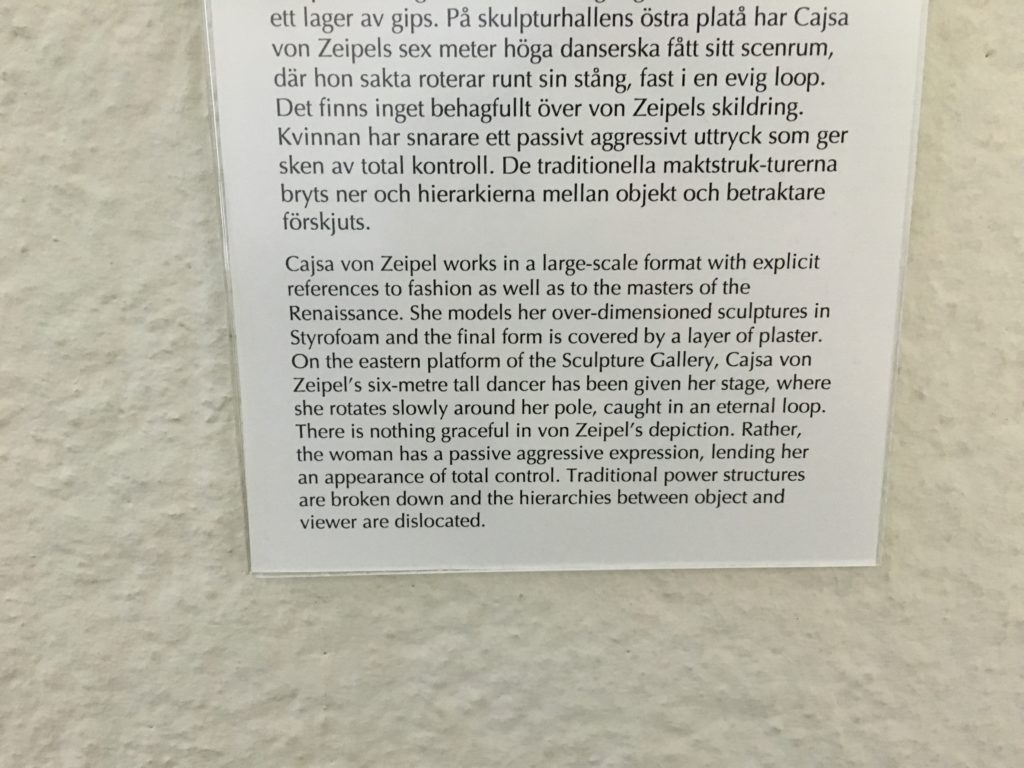 From the placard beside the giant stripper, I was informed that there was “nothing graceful” about her, as if to indicate that because she was not made to be beautiful in some simpering angelic-feminine way, the female figure on display was beyond objectification, exploitation. The placard also told me that because the woman’s expression was “passive aggressive” – I guess she was not smiling? but she did have that lips-parted-sensual-ferocity look so chiefly figured in softcore – she had an appearance of “total control.” Maybe she had an appearance of total control and I was missing it but I want to note here that to have an appearance of control is not in fact to have control. I can make a fierce expression, too, and still have very little control over the fact that I am a woman living in a society that would prefer me to be a stripper made of foam, just as any woman who makes her living or extracts her sense of self from the exhibition of her sexualized body is not in fact in control of the society that enables//encourages her to make money or feel proud for exhibiting it.

The final statement of the placard is my favorite, its being the most unjustified; I really appreciate the way the curators did not make any effort to explain precisely how “traditional power structures” were being broken down, or how those pesky “hierarchies between object and viewer” were being dislocated. We’re just to take their word for it. For the men, I imagine the assurance was enough to make them feel less sleazy for staring eons at a giant stripper, aware that the piece was allegedly challenging them, and they were rising to the challenge by engaging with it – looking at it – and since a woman made it, it couldn’t actually be sexist or patriarchal, since everything a woman does is empowering to women, by default, and especially so if it’s sexual. But women artists make giant sculptures of strippers for the much the same reason that women become strippers and that reason is that no matter how “passive aggressive” our expressions while we’re strung out for all to see, we will be seen as sex objects, by ourselves, by other women, and by men. Visibility for a female artist in most cases all but requires the presentation of a female sex object, be it the artist herself or her artworks, which often become one and the same. The female artist gets a career, praise; the men get to gaze upon more sexualized woman-objects and have it confirmed for them that they were right about women from the start, because when we are granted the privilege to create, we give them more strippers and call it ecstasy, power or empowerment (which is like power but acknowledged to be illusion), rebellion. We say we’re happy with, we’re proud of what they’ve made us and Fuck You, We’re Beautiful. Men approve – “You Go Girl!” – and give us money so we can live, sometimes.

As I stood with those men in that sculpture gallery I did not see any power structures broken down or hierarchies dislocated. I saw men watching a naked woman spin on a pole and look sideways at me, a woman, not yet on a pole but soon maybe, before they grew bored and went to see something else. They were still the viewers. I was no less the object when our time together with the stripper ended.