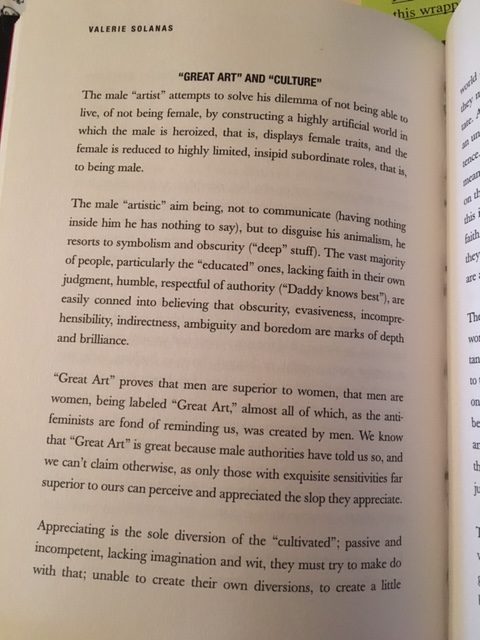 Valerie Solanas’s SCUM Manifesto is probably not the thing to read if you’re looking for a practical analysis of and/or constructive approaches to restoring to tolerability the patriarchal hell zone into which global human society long ago entered and has been wallowing about in ever since, more or less miserably. Solanas’s central thesis that women are innately, biologically superior to men, who are pitiful brainless low-life “brutes” and therefore must be expunged from Earth if the human species is to evolve elegantly + thrive, is not one I’m willing to endorse. Women are not inherently superior; no one is inherently superior to anyone else; the problem is not that the wrong people are in power but the power structures themselves, which elevate some beings (white, male, humans: subjects) to an ascendant status over disenfranchised and subordinated others (not white, female, animals: substance). Reverse the order and you’ve still got oppression: it would be no less virulent. And as disinterested as I am in having to say so, neither hating nor killing men is going to advance the situation of women.

While I cringe at roughly 87% of what Solanas writes in SCUM Manifesto, the remaining 13% is viciously good. The pages above, on man-made art and the figure of the Male Artist (The Artiste), fall into the vicious 13%, for sure. Like Solanas, I’m underwhelmed by the self-absorbed, self-righteous “obscurity, evasiveness, incomprehensibility, indirectness, ambiguity and boredom” that characterizes the bulk of what reputable channels vomit at us as Great Art, which, today as ever, is mostly produced by men, and by women reared on the works of men & desperate to reproduce its star attributes and enter the ranks of the Masters. The Male Artist is a tiresome egoistic asshole we very rarely have reason to venerate. Cultivating “cultural refinement” and “sophisticated tastes” is kind of like purposely concussing oneself upon patriarchy’s marble countertop. Instead, think for yourself, permitting no intrusions upon your perceptions by the pompous tastemakers whose tastes tend towards elitism, solipsism, nihilism, and all those other conventional values and ideologies – the bland cruelties of male power – trussed up in the fancy-dress of erudite dawdling and deliberate opacity.

Solanas concludes: what’s “Great” is typically shit, and “Great” for a reason: because it is in the service of those in power. We are instructed to venerate what has been designed to harm us. Reverence for the oppressor is the terminal symptom of a colonized consciousness: refuse it!