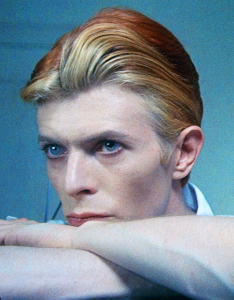 David Bowie, Dearly Beloved, dead now, we are to pay tribute: how he was the innovator dreamboyish archangel of art-rock, the Man Who Fell to Earth, carved of angles and illusion, ever morphing, grinning sidewise sly mutant shapeshifter, an outsider, an alien: he was so different, wasn’t he? With one blue eye, the other hazel. As if he weren’t even human. As if he weren’t a man at all. Hair a shock of chemical-electric orange a blaze sleek over the razored elegance of that beautifully strange face, painted vivid cyan and scarlet or powdered pearl. His body lithe, the hairlessness of it, milk-skinned delicate. As if he weren’t a man at all. With arch grace through calculated spectacle the man born David Robert Jones crafted an image, or a sequence of images spanning four decades, of an exotic supernal creature – David Bowie – he could inhabit and perform for the watching world. The images trhough which he raced made him unrecognizable as a Man – capital M here to mean: a male, allegiant to masculinity as a beneficiary//benefactor of patriarchy – to the humble citizenry of the workaday world it was his aim to transcend, by way of sequins and a superficial chaos of sex role signifiers. That the fascinating creature on stage or on TV was a Man lapsed into obscurity, because of how he dressed, the way that he looked. Singularly a master of artifice the Man who was David Bowie made himself appear strikingly to be something Other. Not a Man at all. And he was a brilliant artist, and he wrote songs that never get tired and he sang them fiercely, do you think I did not love him, too? How he stood slanted and voice shuddered through him, do you think I did not love him, too? How I longed to run forever through the blue cement night of some razed chain-link cage of a city with a friend running behind me my hands in theirs locked against loneliness as we ran, we would not stop running, this trance-scene a private dimension scored by “Heroes” on repeat as I rode alone, eyes closed, on the bus home from the greyness of high school? And I did not want my life to be boring, I thought David Bowie was beautiful. I, too, wanted to be beautiful. If you say run, I’ll run with you. To retreat into incandescent vivid-glitter technicolor dreamscapes remote from the mousy woe of my girl-life. David Bowie passed down to we the lowly visions of living differently; how could we not love him for it? How tempting to forget: David Bowie was a Man.

He was born on Planet Earth. He was brought up a boy. He moved through the world as a Man. It is important we do not forget this simple truth, for what reminds us David Bowie was a Man, not an alien aristocrat, what drags the cosmonaut crashing back down to earth exposed as a terrestrial being, is the dull, sour awfulness of one footnote in his legend, written out as inconsequential and without relevance from the story we are supposed to tell of David Bowie, Dearly Beloved, but which no level of reverence for any man’s art or vision will ever compel me to ignore: his treatment of women and girls. END_OF_DOCUMENT_TOKEN_TO_BE_REPLACED